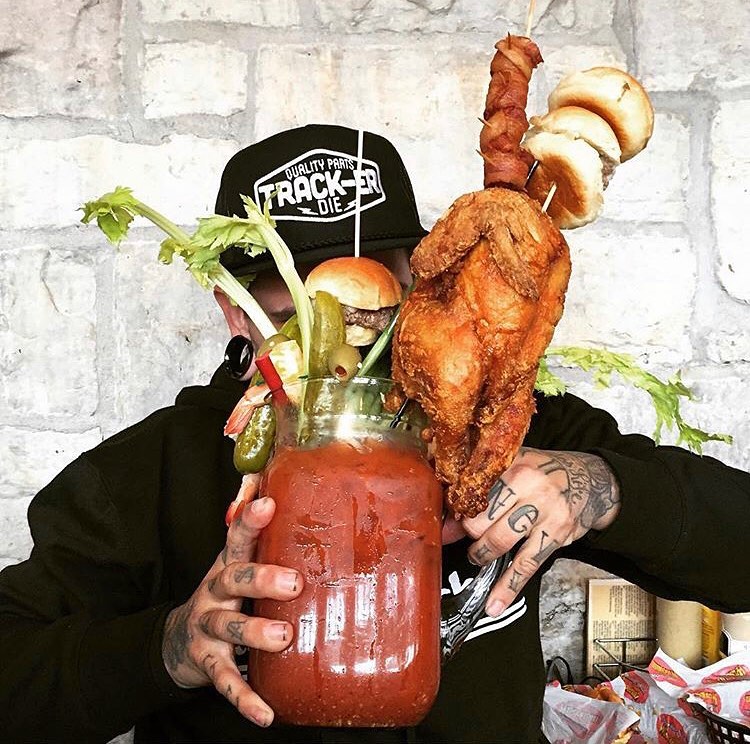 The origins of the Bloody Mary garnish “war” that kicked off in 2015 and escalated into 2016 were as clear as the beverage itself. But the goal was simple, to create the world’s most outlandishly topped Bloody Mary, using only mere food, food flavored alcohol and toothpicks. The winners and losers of this war were not immediately apparent, just like any other war. Some would argue that the customers were the winners, others would say the opposite (“they have to eat and drink the thing!”). What’s clear now, with the clarity that only time can bring, is that the war is over. The little white flag has been raised (dispensed as a scaffold for a Bloody Mary). Now the aftermath comes, the clean-up of menus, of social media cleanses, the tentative conversations with customers, but more importantly, now it’s time to put celery back into glasses.

But first, like any good historian, we must trace the war back to its beginning, in order to truly understand what happened. The drink is said to have originated out of Harry’s New York Bar in Paris, the great expatriate Mecca of the 1920s Jazz Age. A bartender there named Fernand Petiot mixed vodka and tomato juice and called that concoction a Bloody Mary.

Supposedly named after Queen Mary Tudor’s fanatical time on the English throne when she reinstated the Heresy Acts and ordered the killing of hundreds of protestants. The name has also been linked to a particularly rough bar in Chicago called The Bucket of Blood Saloon, where a waitress called Mary would frequently throw buckets of blood and water out onto the street after washing up from brawls in the place.

Despite its multicultural origins, the drink has been fully adopted by the US. The country has raised it into a fully-fledged institution, feared by some and ordered by many. It’s in the midwestern states of Wisconsin and Minnesota that the war really kicked up some gears. Dave Sobelman who is widely credited as starting the war in his Milwaukee restaurant Sobelman’s Pub & Grill reckoned that it happened in his place because of the proliferation of pickled products on hand from the ancestors of German-Polish stock that settled in the midwest. “There’s a lot of industry around here. Next door is a pickling plant. It’s very blue-collar, so many owners before me had pickled eggs, or pickled pig’s feet, and herring in different sauces that they would offer to customers,” he told Vice.

There’s no definitive recipe for bloodies (since ol’ Fernand Petiot just mixed plain old vodka with tomato juice), which has left the Bloody Mary’s very much open to interpretation. This has perhaps led to some problems and perhaps explains how the drink became what it did. Maybe a puritanical legion of Bloody Mary recipe keepers would have prevented things like Sobleman’s Chicken Fried Bloody Beast from existing, unfortunately, we will never know.

Recipes for Bloody Mary’s are varied and bizarre. Nothing is certain about that drink, even the amount of tomato juice and vodka is disputed. More worrying still, is the fact that no one knows what else goes into the drink, some recipes call for clam juice, Worchestershire sauce, lemon juice, while others just throwing in bitters willy-nilly. Sometimes Bloody Mary’s are served over cracked ice, others whole cubes, sometimes nothing at all, poured into glasses rimmed with celery salt or just plain salt. Even the glass it comes in is a free-for-all, it’s been seen in a tall glass, but who really knows at this point what it’s supposed to come in.

One point of permanence that is associated with the drink, is that Bloody Mary’s are considered “good” for hangovers, thanks to the vitamins whirling around in the tomato juice (and the vodka). It’s a desperation drink, ordered when you hit the brink. At one point in all of our lives, we have desperately reached for a glass of the red liquid, that tastes weirdly savory, glugged it down in the hope that whatever it was it would cure us of our ills.

This association as a “cure” perhaps, explains why the drink was originally served with a small accompaniment of food. Realistically a hungover person desperate enough to chance the drink can only handle a little mouthful. Before the war, Bloody Mary’s were served with a stick of celery or little toothpicks of food stuck on top, like a prawn, an olive, cheese cube, a pickle, the list goes on.

It also explains why it became a stalwart of the brunch cocktail menu and went hand and hand with it. It was being ordered by distressed punters during their time of need, alongside its companion the mimosas, which is as close to orange juice as an alcoholic drink can get. Both can be made cheaply, without much direction, with budget tinned tomato juice and cheap concentrated orange juice respectively. They exist on a brunch menu without much thought, there is rarely, if ever even a brunch cocktail menu. They are lone rangers, existing apart from the thoughtful cocktails that typically appear after dark when the bartenders start their shifts. Maybe this is another reason why these drinks were authorized to be sold, there were no bartenders around to put a stop to it, only chefs who lent on what they know, making food and putting food on things.

Brunch cocktails should provide some sustenance to those desperate enough to drink at 1pm.

So the rise of Bloody Mary’s can also be charted alongside the rise of brunch which feels like it was only created a couple of years ago. Brunch has formed into an actual meal in the day (well weekend day). As the lines between breakfast, lunch, and dinner being blurred, so too have Bloody Mary’s. Becoming radicalized with toppings and increasingly popularized by the hungover masses.

It’s sort of easy to see how restaurants around the US latched onto the topheavy Mary’s. They are a novelty, an outrageous cocktail that became a mascot for so many businesses. They were an exciting trend, operating in an entirely new space between food and drink. They were also getting customers out of bed early and into their premises. Their success and the escalation of this war was proof that people want a memorable dining experience at all periods of the day, and that people will get out of bed on the weekend for a trend.

Restaurants across the US became known for a specific Bloody Mary garnish, from entire fried chickens, whole pizzas to cheeseburgers. Entire meals precariously placed on top of glasses was a great novelty for customers, restaurants pushed the boat further and further out becoming known for putting more extreme accouterments on top of the drinks. You no longer got “snack” an olive or a celery stalk with your Bloody Mary, you got an entire meal.

Their popularity soared as well. Who would order a burger when you could a drink with one on top plus fries and a dessert? It makes no sense, but it’s value for money. Especially since these whacked-out concoctions were priced around the 14$ mark. There’s a lot more bang for your buck there, than the typical cocktail, made from a twist of lemon and a dash of vodka.

The shock factor seemed to account for a lot of the escalation. It was difficult to escape the pictures of the towering drinks even across the water, entire Reddit threads accounted for the various things placed on top of the drinks. The images were shared online, people interacted, the restaurant became known for that specific crazy concoction and people flocked to them.

This escalation does seem to have calmed down since its peak in 2016, with many of the restaurants once lauded for their ridiculous toppings, stripping the mad drinks off the menu completely. Opting to sell a “classic” Bloody Mary, whatever that means. It does seem like that crazy time has passed, and we can now look back on with some sort of nostalgia. Maybe because the novelty has worn off a little or enough people have drunk (sorry eaten) the Bloody Mary’s to know better. I suppose we will just have to wait to see where the next iteration of the drink takes us.

Elsewhere on District: TikToker shows the internet how to recreate Studio Ghibli food