The top 10 Crunk covers of all time

Even if you didn’t know explicitly what Crunk is, you no doubt have heard the unmistakeable shouts of Atlanta native Lil Jon. He pretty much spearheaded the whole sound as it sliced through showers of dollar bills in strip clubs across the south in the early 2000s. Even Usher hopped on the Crunk wave and body popped his way to number one with ‘Yeah‘ and Ciara helped develop the Crunk-N-B style showcased in ‘Goodies‘. But prior to that, there were a number of other distinctive spices thrown into the Dirty South’s cauldron that would eventually result in Crunk’s definitive sound.

In the bigger picture, Crunk was deriving its upbeat tempo from the dance-inducing styles of Miami Bass, New Orleans Bounce and Memphis Buck and coupled with chants and the call and response approach it became the go-to sound for DJs in clubs.

It was Lil Jon and the East Side Boyz’ trunk-rattling debut album ‘Get Crunk, Who U Wit: Da Album’ that would first bring crunk to the charts via Atlanta. However, Crunk’s roots are also deeply embedded in Memphis and it was the trailblazing Three 6 Mafia that would produce some of the earliest iterations of the genre through their no-holds-barred delivery and hypnotic chanting. ‘Tear Da Club Up’ is cited as one of the genre’s earliest tracks and the subsequent album ‘CrazyNDaLazDayz’ was pretty much entirely made up of the ‘Crunk’ production style.

However, Crunk is more than just a sound and even today, there’s a few different lines of thought to how it came to be. Though the likes of Outkast used the word ‘Crunk’ in their 1993 cut ‘Player’s Ball’ most credit the contraction of the words crazy and drunk as the origin of the genre’s name. It feels like the perfect word, phonetically speaking to match the bombastic sound on display.

Luckily, another development was running adjacent to the ascendency of crunk in the south to ensure the music got the visual treatment it deserved. From 1992 until 2003 Pen & Pixel operated as a design firm out of Houston Texas and their outlandish, blinged-out style that consisted of layered graphics was the dominant visual identity for rappers from the south.

Due to the prevalence of Pen & Pixel artwork, crunk as a sound, movement and lifestyle got the explosive imagery that it deserved. Though not all artists opted for the same style, it still meant there was a consistently strong aesthetic to the music being sold out of trunks across the south. Here are our top ten crunk covers of all time. Not sure American citizens are rushing to endorse rapping presidential candidates after Pastor Troy’s comments about Lil Nas X and Kanye’s Twitter rants (or maybe they would, nothing surprises me about the United States anymore), but we can all agree this is a pretty banging album cover. 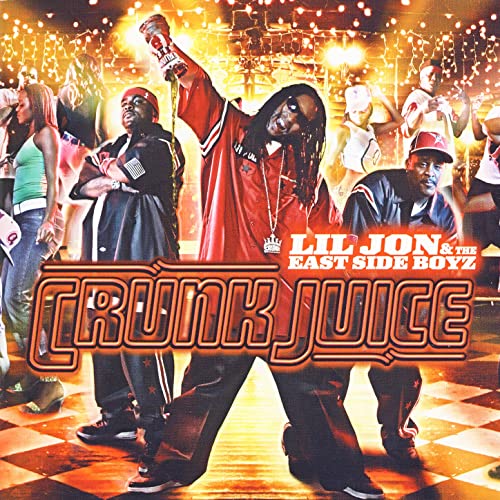 Lil Jon & The East Side Boyz’ fourth and final album was the golden elixir to turn any club upside down. You can almost hear this artwork. – just imagine the goblet screaming “YEAH” as you lift its lid before it lights the club up with a heavenly glow. If this mixtape cover isn’t Crunk then I don’t know what is. The red neon stroke around them, the angle of the head tilt coupled with the shades glistening.

Baddazis – Fuel To The Fire Maybe clutching at straws calling Baddazis’ ‘Fuel To Da Fire’ a crunk project, but the mixed bag of southern fried sounds certainly embraced the fiery back and forths that came hand in hand with the genre, especially on War Face which featured Pastor Troy.

That explosive energy is reflected in the cover art in what feels like a billboard meets fucked up family portrait. Diamond encrusted, flame-grilled steel font? Don’t mind if I do.

The vibes are immaculate. Gangsta rap meets crunk in C.M.P’s ‘Da’ Game’ and there is nothing, I repeat, nothing, more gangsta or crunk than dogs counting their stacks in oversized and expensive suits.

Pass me the bubbly. Honestly, this album is a welcome breath of fresh air from the overwhelmingly blinged-out, multilayered universe of Pen and Pixel artwork.

There’s a certain Je ne sais quoi about the posture of the Glock raised above the bible, sacred almost. As for the snakeskin shirt; it’s as crunk as it gets. There’s just so much going on in this cover.

Mr. Joshay’s ’21 Crunk St’ juxtaposes the mundanity of the everyday insitutions of his neighbourhood like the barbershop with the much coveted goal of cars, money and women that a successful rap career promises. Crunk is a lifestyle and Mr. Joshay gets it.

E-Mac – Get Crunk With Me Feeling a little like The Matrix’s offering of the red or blue pill, E-Mac lends two outstretched arms only this time the proposed state of higher consciousness promises infinite weed and wealth.

The cover of ‘Get Crunk With Me’ is an invitation to a different life, one that can only be accurately described with diamond-encrusted bold font. The ‘Undiscovered Mixtape’ has a sense of urgency throughout and it’s reflected in the artwork.

Gold grills on a tragedy mask is a new one to me, but alongside the comedy mask, it leans into a good cop bad cop routine of sorts that’s heard in their back and forths on the project. ‘Tear Da Club Up’ is a certified rager for ages and the artwork pretty much sums up the mess left in the wake of the record being played in the club. Looks like the final scene in an undercover mission the Memphis legends undertake to save America from an oversaturated music market.